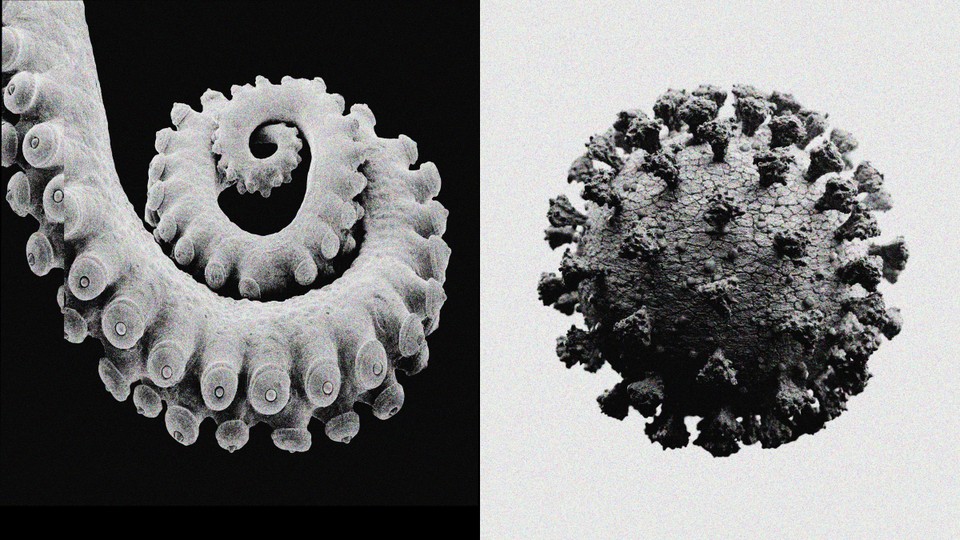 The Case for Kraken

A new subvariant of SARS-CoV-2 is rapidly taking over in the U.S.—the most transmissible that has ever been detected. It’s called XBB.1.5, in reference to its status as a hybrid of two prior strains of Omicron, BA.2.10.1 and BA.2.75. It’s also called “Kraken.”

Not by everyone, though. The nickname Kraken was ginned up by an informal group of scientists on Twitter and has caught on at some—but only some—major news outlets. As one evolutionary virologist told The Atlantic earlier this week, the name—at first glance, a reference to the folkloric sea monster—“seems obviously intended to scare the shit out of people” and serves no substantive purpose for communicating science.

Yes, Kraken is klickbait. It’s arbitrary, unofficial, and untethered to specific facts of evolution or epidemiology—a desperate play to get attention. And mazel tov for that. We should all rejoice at this stupid name’s arrival. Long live the Kraken! May XBB.1.5 sink into the sea.

Since Omicron spread around the world in the fall of 2021, we’ve been subjected to a stultifying slew of jargon from the health authorities. Miniature waves of new infections keep lapping at our shores, and the names of the Omicron subvariants that produce them slop together in a cryptic muck: XBB.1.5 has overtaken BA.5 in recent weeks, and also BF.7, as well as BQ.1 and BQ.1.1; in China, BA.5.2 is quickly spreading. One might ask, without a shred of undue panic, how worried we should be—but the naming scheme itself precludes an answer. You don’t even need to ask, it says. You’ll never fully understand.

This isn’t subtext; it’s explicit. A spokesperson for the World Health Organization told my colleague Jacob Stern that people should be grateful for the arcane pronouncements of our leading international consortia. “The public doesn’t need to distinguish between these Omicron subvariants in order to better understand their risk or the measures they need to take to protect themselves,” he said. “If there is a new variant that requires public communication and discourse, it would be designated a new variant of concern and assigned a new label.” In other words: None of what we’re seeing now is bad enough to merit much attention. You don’t need to make any brand-new precautions, so we don’t need to talk about it.

The public may not need to draw distinctions, but do those distinctions really need to be obscured? A different set of names, one that isn’t precision-engineered to harpoon people’s interest, wouldn’t have to fool us into feeling false alarm. It’s not as though our habit of assigning common names to storms leads to widespread panic every summer. When Hurricane Earl appeared last September, no one rushed into a bunker just because they knew what it was called. Then Ian came a few weeks later, and millions evacuated.

Granted, Kraken sounds a bit more ominous than Earl. (Of all the labels that could be given to the latest version of a deadly virus, it’s not the best.) But the name is more befuddling than terrifying: a nitwitted reference, somehow, to ferocity, absurdity, and conspiratorial delusion all at once. Even so, a silly name still has the virtue of being a name, whereas a string of numbers and letters is just an entry in a database. Kraken doesn’t care if you’re afraid of COVID, and it doesn’t mind if you’re indifferent. It only wishes to be understood.

Isn’t that important? A proper name eases conversation (wherever that might lead) and makes it possible to talk about what matters (and what doesn’t). Just try telling the public that Hurricane Earl will be no big deal but Ian is a mortal threat, but instead of “Earl” and “Ian” you have to say “BA.2.12.1” and “B.1.1.529.” The committee that names our storms is chasing clouds instead of clout; it knows that branding efforts make it easier for everyone to stay informed. We might have done the same for SARS-CoV-2 and handed out simple, easy-to-remember names for all the leading Omicron subvariants. (Through 2021, we used Greek letters to describe each major variant.) If Kraken seems alarmist now, that’s because we’re living in a different, dumber timeline, where public legibility has been forbidden. Why give this subvariant a name, the global-health officials ask, when it isn’t really that much worse than any other? But that’s a problem of their own creation. If Kraken seems too gaudy, that’s because every other recent name has been too drab.

Having useful, catchy names doesn’t mean avoiding all abstraction. Florida residents were glad to know, last fall, which hurricanes were Category 2 and which were Category 5; it may be just as useful to remind yourself that Kraken is not now, of its own accord, a “variant of concern,” let alone a “variant of high consequence.” Our trust in those distinctions is a product of their formality: A special group of experts has decided which public threats are the most important. The Kraken name, if it continues to spread, could undermine this useful sense of deference—and leave us in an awkward free-for-all where anyone could give a name to any variant at any time.

For the moment, though, our only recourse is to the numbing nomenclature currently in place, and the creaking bureaucracy that delivers it. Any other name for XBB.1.5—any better one than Kraken—would have to come from the WHO, an organization that recently spent five months rebranding monkeypox as “mpox” and that has warned that disease names such as “paralytic shellfish poisoning” are unduly stigmatizing to shellfish. Kraken has the crucial benefit of being right in front of us. It’s a stupid name, but it’s a name—and names are good.