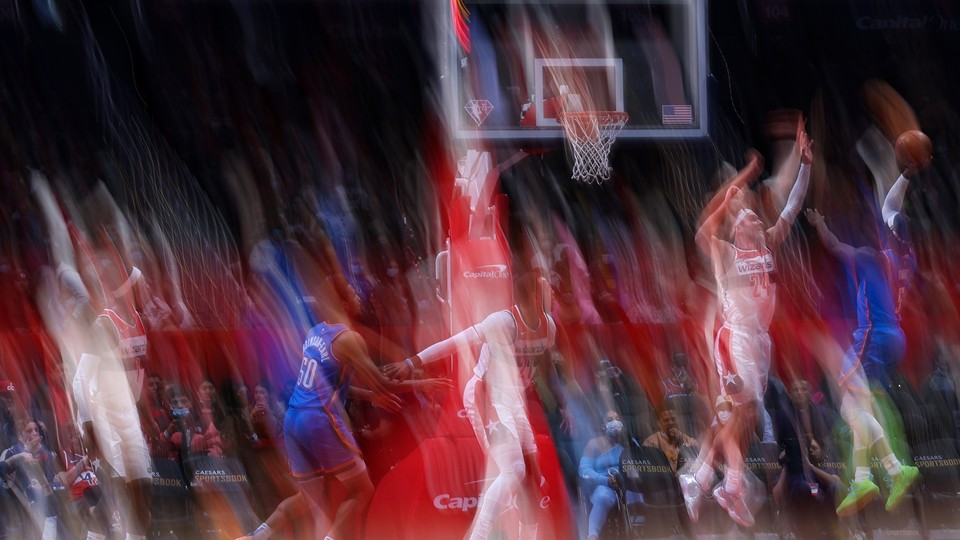 Why Can’t I Stop Rooting for a God-Awful Basketball Team?

When I attended a Washington Wizards open practice at D.C.’s Capital One Arena earlier this month, the focus was more on spectator entertainment than Rocky-style workouts. The season opener was a week away, and the players ran drills at half speed and engaged in silly skills competitions for fans, including a basketball version of Connect Four. But as a lifelong Wiz devotee, I was having an awestruck, love-you-man moment. Here I was posing for a photo with Phil freakin Chenier. Franchise royalty. My childhood idol. Back in the 1970s, when Chenier was draining jumpers and sporting a Richard Pryor mustache, the team routinely chased titles. These days? Not so much.

Being an NBA fan who loves the Wizards is a little like being a foodie who adores turnips: It just doesn’t make sense. Since the 2000–01 season, only the Knicks and Timberwolves have lost more games. The franchise last advanced beyond the second round of the playoffs in 1979 (back when they were called the Bullets), and they’ve missed the playoffs 16 of the past 25 years. We fans have endured 40-plus years of frustration and disappointment, mainly from the typical issues—bad defense, bad draft picks, bad trades—but sometimes from … weirder ones: One All-Star player was charged with a gun felony involving a teammate, and another was once suspended without pay for being overweight. It’s all #SoWizards, to use a Twitter hashtag.

And yet, I made it out to the open practice with a few hundred fans on a Tuesday night, wearing a Wizards T-shirt and feeling the faint, irrational warmth of preseason hope. Anyone can root for a winner. That’s easy. Last season, the NFL teams with the top-selling merchandise were the Cowboys, 49ers, Patriots, Steelers, and Chiefs. Each team finished with a winning record. In Philadelphia, the currently undefeated Eagles and the World Series–bound Phillies have generated a 20 percent or more increase in business for local restaurants, sports bars, and memorabilia stores.

But rooting for the middling Wizards takes guts at best and is downright masochism at worst. Still, even though the team is more likely to bring me agony than elation, I can’t fathom supporting any other franchise. The same is surely true of my fellow Wizards fans—and many fans of other perennial losers (hey, the Detroit Lions somehow still have fans). So why do we stay hooked?

My Wizards fandom began in the D.C. suburbs in the ’70s, when I was a Bullets-crazed kid devouring box scores on the sports page, shooting jumpers on a backyard dirt court, and pretending to be Chenier. I was 12 when the Bullets paraded down Pennsylvania Avenue to celebrate their only title, and the subsequent 44 years have brought lots of bad memories: Last season, the Wizards somehow blew a 35-point lead against the L.A. Clippers. The worst part? I wasn’t surprised.

Recent pain should feel stronger than childhood joy, I would think—even for fans like me, whose support was passed down geographically. But these deep, die-hard roots can influence our adult behavior. “Early learning is incredibly powerful and hard to erase,” Chris Crandall, a psychology professor at the University of Kansas who has studied fan allegiance, told me. The team’s success 50 years ago may have boosted my childhood loyalty, Crandall explained, and their subsequent failures did not remove it. A new attitude (“Wow, these guys stink”) essentially “lays over the old one, but the old one is still there,” Crandall said. “And it’s very difficult to get rid of it.”

I’m at least old enough to remember the team’s lone championship. The top memory for Wizards fans in their 30s is probably John Wall’s dramatic game-winning three-pointer in Game 6 of the Eastern Conference semifinals. The Wizards, of course, then lost Game 7. But one reason fans stick around is the perverse pride they have in their fandom, Edward Hirt, a professor at the University of Indiana who has studied sports-fan psychology, told me. Rooting for the Lakers or the Dallas Cowboys is like wearing khakis: You hardly stand out in a crowd. Loving the Wizards gives me a defiant sense of individuality. “Do you want to be like everybody else, or do you want to be different?” Hirt said. “The answer is neither. We want to be a little bit of both. We like feeling like we belong, but we don’t want to be seen as a clone of everybody else, either.”

Supporting a loser satisfies both of those desires. I can commune with fellow fans at a sports bar or game, but when I walk through an airport, even in D.C., I’m often the only guy wearing a Wizards cap. And honestly, I like that. My Wiz fandom, Andrew Billings, a sports-media professor at the University of Alabama, told me, sends a message to the world: “How loyal am I? I root for the Washington Wizards.” (Which, let’s be real, would be a great T-shirt). In a 2015 study of students from seven universities, football fans were 55 percent less likely to wear team apparel following a defeat compared with a win. But those who do are making a statement: I’m not a fair-weather fan; I’m dedicated and trustworthy.

Those noble qualities explain why fans of lousy teams despise fair-weather fans, Hirt added. Bandwagon fans skip the suffering but embrace the glory. If the Wizards somehow reached the NBA Finals this year, I’d be both thrilled and infuriated by the mobs of rapturous fans at downtown watch parties. Where were these bandwagon yahoos in 2001, when the team finished 19–63?

But maybe winning matters less than we think—even for die-hard fans who react to each loss with a primal scream. In one 2019 study, fans of a college football team felt a two-day rise in self-esteem after a victory. But self-esteem levels didn’t drop significantly among losing fans. One of the reasons: Even if your team loses, you can raise your self-esteem simply by commiserating with friends, Billings, a co-author, said.

Yes, suffering sucks, but suffering together has some upsides. It can be a social glue that intensifies bonds with the team and fellow fans. “Going through this hardship with your sports team makes you much more likely to stick with them,” Omri Gillath, a psychology professor at the University of Kansas, told me. Fans don’t just bask in reflected glory, or BIRG, as psychologists call it; they also BIRF—bask in reflected failure. “It’s about having a community of people that understand you and like the same thing that you do,” Gillath said.

Last season, a friend and I attended the Wizards’ home finale, and they got shellacked by the equally lousy Knicks. But my friend and I enjoyed laughs over pregame beers. We made sarcastic comments as the Wiz turned a 10–0 lead into a 22-point deficit. I bought an end-of-the-season discounted T-shirt at the team store. Listening to Knicks fans hoot about their victory was annoying, but we had fun. And we bonded.

But rooting for a losing team may be a dying phenomenon. Sports betting and streaming have made sports more solitary and less tied to where you live—undercutting some of the reasons fans endure their god-awful teams. “Geographic loyalty is particularly powerful for older generations, partly because they weren’t nearly as mobile with their jobs or their careers as younger people are,” Billings said. “I live in Alabama. If I wanted to be a Golden State Warriors fan, I could access all 82 of their regular-season games in a way that was not possible for older generations when they built their fandom.” Younger fans may also be more likely to follow a single player than a particular team, Billings believes.

Let’s be clear: Winning is way better than losing. A 2013 study found that on the Monday after NFL games, fans of losing teams were more likely to consume saturated fats and sugars compared with fans of winning teams. But I truly believe—and maybe this is loser talk—that my decades of Wizards fandom have made me a better human. I have well-developed coping skills. My friends and I are like Statler and Waldorf, the crusty hecklers on The Muppet Show: We manage head-smacking losses with well-timed quips. I don’t get too elated after a victory—although victories mean more when they’re rare—or too down after a defeat. Hell, maybe it’s even made me more empathetic to people’s challenges. After all, most of us in life can relate more like the constantly struggling Wizards than the trophy-hoisting Warriors.

Even though I know better, I’m optimistic this season won’t be a #SoWizards year. Maybe the team will jell. Maybe the young players will develop. Maybe the veterans will stay healthy. Or, you know, maybe not. A struggling sports franchise, I’ve decided, is like your idiot brother or jackass uncle. Despite all their obvious flaws, you still love them. And so I’ll cherish disco-era Bullets memories, celebrate the unexpected victories, cling to foolish hope, and brace myself for the worst. If they miss the playoffs—again—well, there’s always next year.